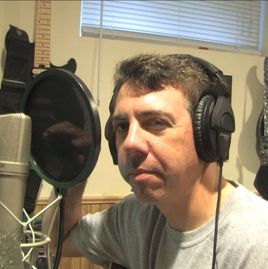 Joseph is a singer-songwriter from NJ whose singles Damned (2022), Take Me (2020), and More Friends In Heaven (Than in Hell) (2017), and EPs Time and Colors and Graveyard of Dreams (2015) received critical acclaim. The latter charted in the top 5 radio play on WGLS-FM NJ USA and in the top 20 in 2 other markets. Joseph completed a 22 performance 3-state USA tour in December of 2016 and prior to Covid has performed in New York, Las Vegas, and Chicago.  Joseph was the #1 featured artist on WOA Records Independent #1’s Volume 8.  Joseph attended the Grammy Awards 2020 in Los Angeles, CA USA as a fourth-year voting member of the Academy.

The single Damned was recorded during Covid and released in January 2022. The fun sounding rocker was originally more than six and a half minutes long. The single radio edit clocks in at 5:07 and is available on all digital platforms.

The single Take Me released in 2020 was influenced by EDM club beats from Joseph’s early days as a musician in NJ heard at the landmark club “The Melody Bar of New Brunswick” when he cut the lead guitar part on dance single Cecelia with N-Kuntrol.  “Take Me is an insanely fun track that will make you want to get up and dance, or at least keep your shoulders moving in your seat”. (Review Fix)

The EP Time and Colors was inspired by the idea that we are all artists born into the world with a blank canvas.  In one sentence Pagano would say that "life is an art-form".  We are all born into this earth as artists with a blank canvas.  We get to decide what we put on that canvas.  All we need is time and colors to express who we are, what we see, what we feel, where we have been, where we want to go.

“If I had to pick just one track on the [Graveyard of Dreams] EP to share with you, it would have to be "Little Girls". By far the cutest song that I have ever heard, Joseph sings about the joy and love that his two daughters have brought into his life.” (Voice Magazine)

The song Don’t Let Chances Pass You By suggests that “at times we are given opportunities that we have to grab onto before they are gone forever. With that message put to rock music, perhaps this song can bolster your courage to take chances as they come by”. (Voices Magazine)

All records are original songs that Pagano wrote, arranged, recorded, produced and mastered himself in his studio in NJ.  Pagano performed guitar, ukulele, bass, keyboards, synthesizers, drum machines, and vocals.